A downloadable Jojo's Last Stand for Windows and macOS

Jojo's Bizzare Adventure: Last Stand is a 2D fighting game based on the anime Jojo's Bizzare Adventure. Play as Jotaro or Dio and fight against the AI or your friends in local multiplayer! Fight across two battlefields: Cair At Night and Dio's Castle! Unleash your Stand's unique Powers in a battle to the death using 3 different attacks, as well as 3 different abillities. The game is made in the Unity Engine.

I don't own any rights to the characters, music, sprites or sounds - this game was made by a fan for fans, not any monetary gain. Enjoy.

Extract the archive and run the game

Reply
Tony The Wolf36 days ago

love this game, but i wish there was more content, the combat physics are EXTREMELY well made, but i really wish there was more characters or more maps. other than that this game is a masterpiece and i hope we get more updates
Some characters that would I would love to see in this game is: Diavolo (King Crimson / Epitaph) Yoshikage Kira (Killer Queen)  Giorno Giovanna (Gold Experience) Bucciarati (Sticky Fingers) And Joseph Joestar (Hermit Purple)

Fun game! But I did find a cheese with the main attack that I show in the video. Other than that, the only problems I have is that the barrage can be ran through from outside, and that rarely the enemy just flies off. 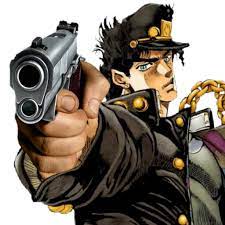 I love this game and really have fun with it. But with that said there are a few problems I've occurred. The  biggest being that while using a barrage on the enemy they can just walk through it and cancel you. It could be longer and make you invincible but at the cost of costing more mana. Next is the ai, I know making one that's good can be hard but there are some bugs. One has already been stated that they rush you at the beginning of EVERY SINLGE MATCH. And for dio he just uses the world. Jotaro just spams is side stand ability and Kakyoin stay at the other end of the map shooting projectiles. I know these are big things but they could really improve the game experience when fixed.

I thought that this game is going to be cringy, but it's nice! But I'm such a noob in fightings that i couldn't beat any AI without making it fly over the map)

thats oddly specific, also most 2 year olds cant even read, even some 6 year olds dont know how to read lol (Unless the 2 year old happens to be Einstein and is a genius)

THIS IS SO GOOD

Hahahah, nice try beating Dio on hard! I made the ai ruthless hehe

For his neutral he is a

PAIN IN THE ASS!

Based on the For his neutral meme

HOW DO I PLAY

the game looks amazing, but the controls barely respond. i only win the fights because at the start the cpus RUSH OF THE MAP! they just charge at you and fall, and if they don't then i get flawlessed in a 1v1. PLS FIX THIS

WHAT THE FREAK ARE THIS MOVES

Why does Standing Normal attack (third hit) not combo from 2nd hit? Also, please make a combo system to the game. I could give some ideas.

Also why not make Stand Power a type of Overdrive that will give you usage to ult moves, but decrease your Energy gain? Also some buffs for a character in Stand power.

I think infinite mana is enough of a buff. But yes I wanted to add an Ultimate Move after activating Stand Power that would end it immediately after using it. That would give you the extra strategy element of "Do I want infinite mana or do I risk using an ult and hope it will hit"

Also let jotaro counter moves on frame 1, and give it a LOT of endlag 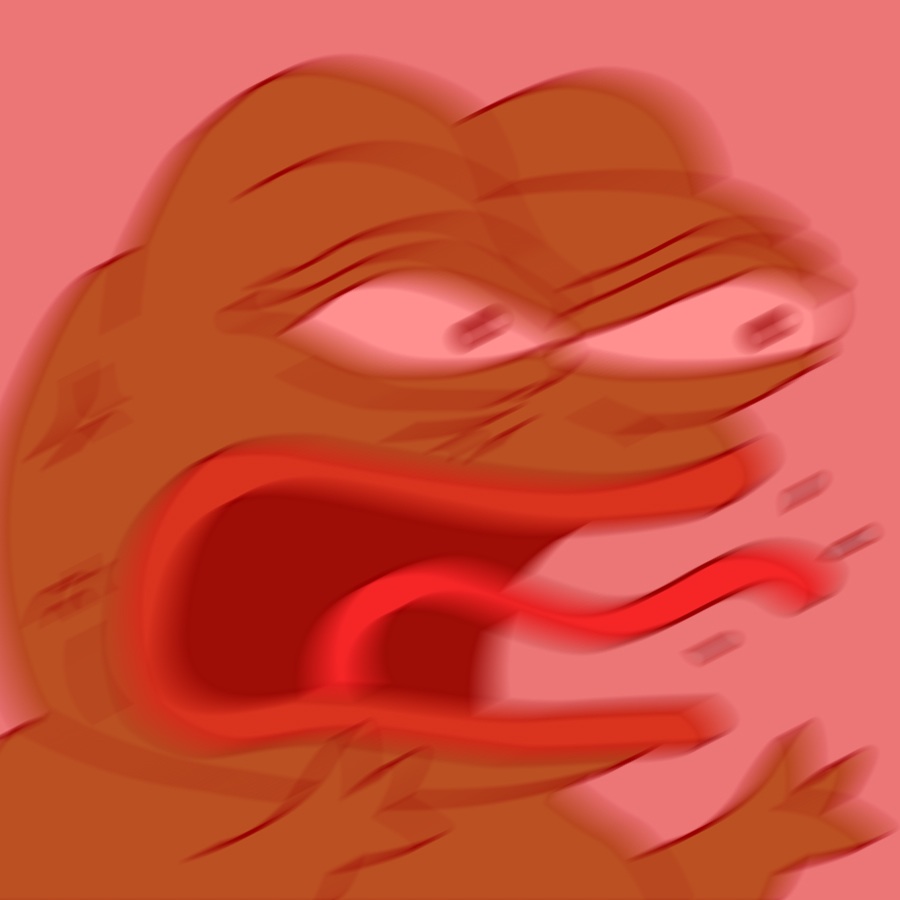 Me playing as dio 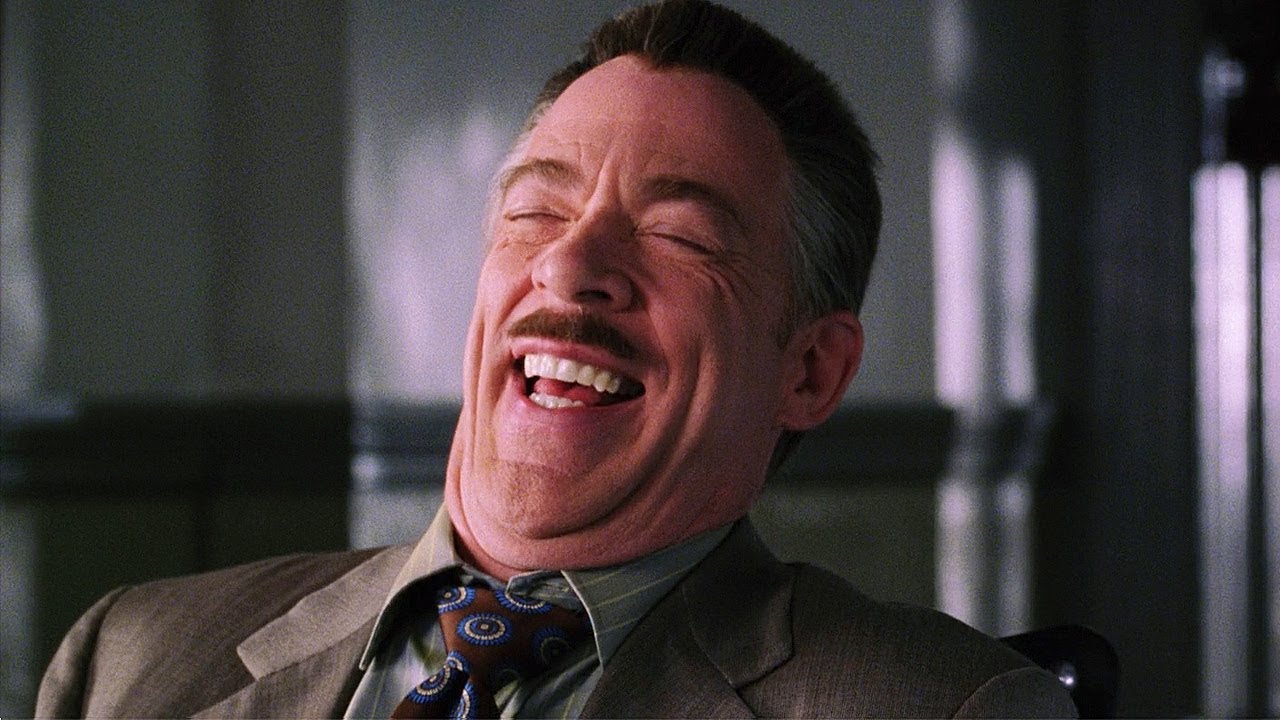 Bruh, dio is so fun to play, but so hard to fight!

Buttons doesn't work for me, im running the game in Linux with WINE.

hey how do you use time stop using dio/jotaro?

It's not bad, but there are a couple things that could be improved:

DIO's timestop appears to be glitched,  but only on the player's side. When I use it, all I can do is move around and perform a single hit on the enemy. I can't charge up my stand, I can't use any stand attacks (i.e stand barrage or knife throw) or anything else. Doing a single hit on the enemy also automatically stops timestop. Enemy DIO timestop can let him use his stand barrage/stand attacks though, so it's unfair on the player.

A.I Jotaro constantly abuses his counter move, even on easy mode. Whenever I attack him it's usually a 1/3 chance that I'll get countered, which seems way too much to be fair, considering how strong the move is.

Whenever I use a stand barrage with Jotaro/DIO it can just randomly stop after the first or second punch or be interrupted by the enemy, but this never happens when the enemy uses their stand barrage.

If these are fixed then this could be a pretty decent game, but otherwise it's kind of frustrating.

Preventing special attacks when time is stopped is intentional, so it's not too overpowered. It lets you get a better position etc. The fact that ai can use them is a bug ofc.

You're right, will improve his ai.

Thanks for the feedback & bug reports :D

The game is a bit too simple for many, especially a real fighting game player. There's quite a lot to fix on.

I personally want the creator to add kira yoshikage and kosaku kawajiri.(Because of sheer heart attack for kira and bite za dusto for kosaku).

Kakyoin is cool and all,but does he have 20 meter emerald splash?As an ultimate or something.

I wanted to add Ultimate moves in the future as an alternative for Stand Power. Either you have the infinite mana for a period of time like now or you can use an ultimate abillity. Road roller for Dio, maybe a time stop for Jotaro.

Nice game for me as a BIG jojo fan.Very cool.

is it multi player

i hope it is

It does have multiplayer

The game is fine, it is a very good game, the animation is very good, retro graphics that is also very good, but the controls are terrible, sometimes they do not respond or are simply not comfortable at all.

can you play this on cromebooks?

The entities (cpus) slide sometimes when they use their skills

What are the keybinds?

is this game even free on the school laptops 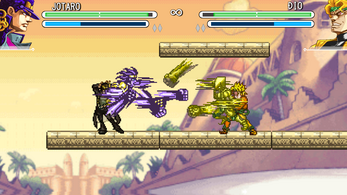 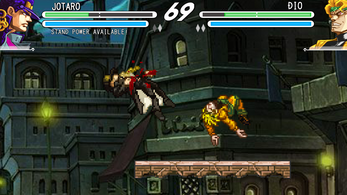 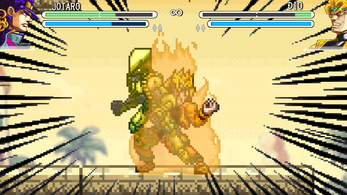 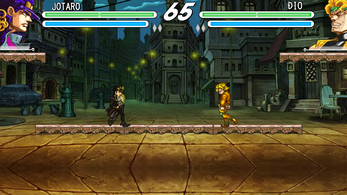 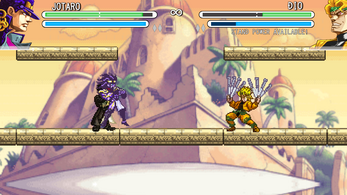